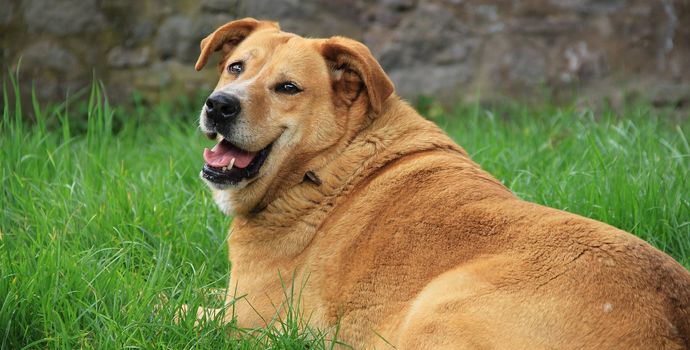 Canine obesity; why should we be worried?

It will come as no surprise to Labrador owners that a recent study concluded that over 1/5th of Labradors have a genetic predisposition to be greedy and put weight on! Cute and cuddly as chubby dogs may be, being overweight poses serious health and welfare issues to our portly pals. Canine obesity is a condition where the dog’s body fat percentage is excessively high, and their quality of life and health are seriously impaired by this extra weight. As in all animals, fat storage occurs when the energy input, i.e. calorie intake, exceeds the energy output, i.e. how much energy your dog burns during the day. It makes sense, then, that obesity occurs in dogs who live inactive lives, eat too much, are allowed to eat tit-bits from their owners or are given excessive treats, and don’t get much exercise. Other factors, such as neutering, breed and age can predispose to obesity – but these are not excuses!

So now we know what obesity is, the following question arises…

“Why is it so bad if my dog is overweight?”

For a dog, being overweight will impinge upon his physical (and, ultimately mental) well-being. Some of the negative physical manifestations of obesity include the following:

●     Musculoskeletal issues: excess weight on doggy joints can lead to conditions such as osteoarthritis, where the cartilage (which surrounds joints and allows them to move easily) becomes worn. This condition can result in pain and stiffness, limiting our dogs’ activity levels, and consequently, restricting them from doing things which may bring them great happiness. Such activities include, but are not limited to, going for walks, chasing balls and terrorising the local squirrels in the park.

●     Heart disease and hypertension: hypertension means high blood pressure. Hypertension is a common consequence of obesity in dogs (and humans!). The increased pressure means that the heart has to work even harder to pump blood effectively around the body. As a result, the dog may become exercise intolerant, meaning, again, those pesky park squirrels are safe and un-chased, and your faithful friend is unhappy!

●     Respiratory distress: the increased fat can place excess pressure on the lungs themselves, and also on the diaphragm, which is essential for normal breathing. This is distressing for your pet, and also causes exercise intolerance and lethargy.

●     Endocrine issues: the endocrine system is the hormonal production system of the body. One vital function of the endocrine system is in the regulation of blood glucose levels; glucagon is produced by the pancreas and released when the blood sugar levels are low, causing the release of energy from fat stores. On the opposite end of the spectrum, the pancreas also produces insulin in response to high sugar levels, causing sugar to be stored. When a dog is fed too much and exercised too little, he will have more tissues in the body; the pancreas produces insulin, but often this is just not enough. Over time, when the pancreas has to continually produce insulin, it gets fatigued; this will result in a shortage of insulin in the body, elevated blood glucose levels, and a condition known as diabetes mellitus. Type 2 diabetes is more common in cats than in dogs, but it can be seen in obese dogs. Another endocrine system which can be disrupted is the reproductive system, making it harder for bitches to get pregnant and carry a pregnancy successfully.

A whole host of other health conditions can occur in obese dogs, such as cancers, an increased anaesthetic risk and poor liver function.

To summarise, obesity in pets leads to health issues which will shorten his lifespan, and impinge upon his quality of life. All owners will be alarmed by this, of course, so perhaps your next question is…

“How I you know if Rover is looking a bit rotund, Pluto is a bit podgy or Fido is a tad fat?”

As a rough guide, you can go through the following checklist:

●     Are you unable to feel your dog’s ribs, when you run your hands along his sides?

●     Does your dog’s belly hang, instead of pulling up around his flank (the “abdominal tuck”)?

Other issues to consider are is he slow and lethargic, especially on walks? Does he struggle to exercise for prolonged periods of time, and pant excessively? Does he pant when at rest? Does he struggle to get up after lying down? These can be indicators of a wide range of ailments, such as heart disease, pain and respiratory issues, which may be nothing to do with obesity! Nonetheless, they add evidence to the investigation that your dog may be obese.

If the answer to any of the above is yes, speak with us about weight management. Obesity is a serious welfare issue, and any of our vets or nurses would be delighted to help make your pet healthier!

“If you think dogs can’t count, try putting three dog biscuits in your pocket and then give him only two of them.” Phil Pastoret